From Building Block to 30 Rock: A Lifelong Lego Hobby

The famous plastic bricks, which can be used to build everything from homes to spaceships (and pieces of which probably have been stepped on by parents worldwide) were invented more than 50 years ago by Ole Kirk Christiansen, who actually started out making wooden toys. The company’s name is an amalgam of two Danish words, leg and godt, which, when combined, translate to ”play well.” In my mind, there’s not a better product out there today – one that is durable, well-made, and that allows for the creative mind to flourish.

The first Lego sets were quite simple, combining basic bricks and ”plates.” Windows, trees wheels and cars arrived soon after. Believe it or not, the Lego figurine, popularly known as the ”minifigure,” didn’t arrive until 1978. Themes also took hold: ”Space” and ”Town” were among the first, and beginning in the 1990’s and the 2000’s the company branched out into franchises including Star Wars, Harry Potter and Indiana Jones. Look on store shelves today and you’ll find a ”SuperHeroes” line featuring characters from the DC and Marvel universes. Superman as a minifigure? Whould’ve thought?

One of the first Lego sets I ever owned was a Basic set, complete with instructions to build houses, automobiles and airplanes, but not the Millennium Falcon. I grew up in northern Manhattan, and my Lego pieces got stuck in every nook and cranny of my family’s old apartment. In fact, I distinctly recall leaving behind a yellow brick in a space between our hardwood floor and a hallway wall when we finally moved out in 1979. The rest of my Lego collection went with me to the Philippines, and on the plane ride there, my parents let me build from a selection of bricks from a small travel bag I carried (and unlike my old apartment, I don’t think I left any pieces on the plane.)

Lego toys were few and far between in my new home country, with the bigger sets only available in the capital city of Manila. At some point, with a lack of supply and other distractions abound, I lost interest in my hobby. My Lego blocks went unplayed with, and a cousin of mine even took to fashioning jewelry out of the neglected pieces. Lego left my life.

In 1982, I caught a showing of Star Trek II: The Wrath of Khan, the first time I can recall ever watching Trek. I became enamored with the U.S.S. Enterprise, with its flying-saucer-shaped primary hull and its streamlined nacelles, leaving behind a beautiful trail of stretched starlight when the ship jumped to warp speed.

I had to build one for myself. But with what?

I rushed home from the theatre and found my old bag of Lego, in the same travel bag my parents let me have on the plane ride to the Philippines. With a collection of very basic bricks – not much more, and not including the pieces my cousin made into jewelry – I built my own starship Enterprise using only what I’d remembered from watching the film. The final model was yellow and green and blocky and absolutely nothing like the ship they’d shown on the silver screen.

But it was my own, and apart from becoming a Star Trek fan, I also reconnected with Lego again. During the few times my parents would go to Manila, I’d be sure to ask them to bring back whatever Lego they could. And once my family returned to the United States in 1983, I started collecting the toys again, and I haven’t stopped since.

I’ve built the Chrysler Building, or something like it.

I’ve created mosaics and even got to visit Lego’s U.S. headquarters in Enfield, CT – where I got to study, up close, a brick-and-plate model of the U.S.S. Enterprise built by the Lego professionals themselves. 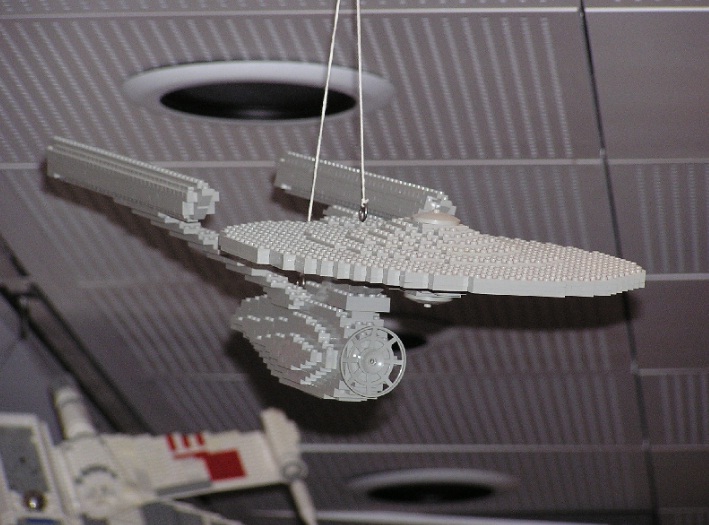 And finally, in November 2011, a lifelong dream came true: I was invited by I LUG NY, a Lego fan group (”LUG,” a common acronym amongst fans of the brick, stands for ”Lego Users Group”), to install an original creation at the Lego Store at Rockefeller Plaza, smack dab in the middle of their busy holiday season, when the display would be potentially seen by hundreds of thousands of people. Truth be told, the display isn’t all that grand: a small, windowed cube measuring perhaps two feet in each direction. But like real estate, it’s all about location, location, location, and landing a Lego creation at 30 Rock is nothing short of spectacular. 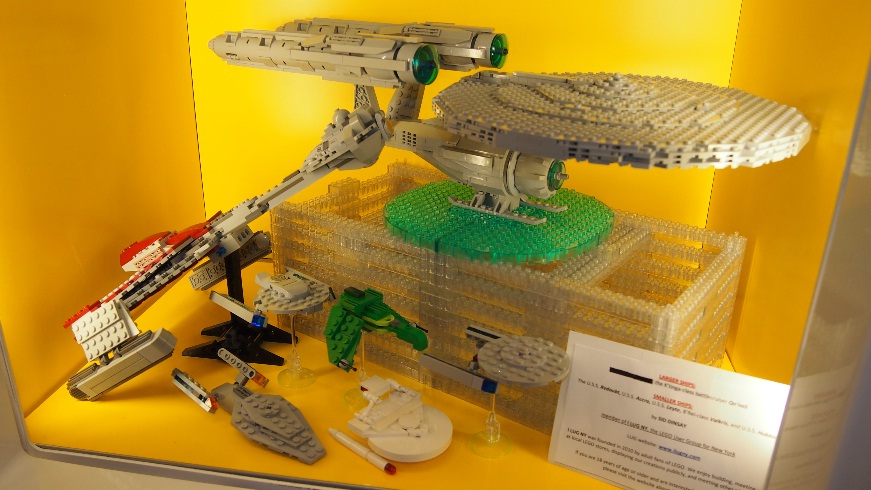 You can probably guess which model I chose for the display.

The Enterprise could make other stops at Lego stores elsewhere – Queens, Long Island, Connecticut and New Jersey, to be exact – so if you miss it at Rockefeller Center, don’t worry. And there’s always my personal blog, where I plan to document my hobby down to the last brick.

My kids have recently taken to Lego: Ian (8 years old) likes to build miniature baseball stadiums, and Mallory (age 6) builds everything from houses to amusement parks. My wife’s not a big fan – sigh! – but as it turns out, this hobby of mine, which has gone from the nooks and crannies of an apartment in Manhattan all the way to the Philippines and straight into a display case in Rockefeller Center, will continue on into the next generation.