Hair to Help: Shaving For a Good Cause

I shaved off my facial hair.

Well, technically I had it shaved off for me.

It’s in the name of a client, and in the name of charity. I now look like an alien to anyone who knows me, and to myself as well. I can only imagine what my wife will say when she sees me – and I hope my big pup, Oscar, doesn’t get too confused.

The client is my beloved New York Rangers, who began their quest for the Stanley Cup last night against the Ottawa Senators. The facial hair has come off for the Rangers’ ”Beard-A-Thon” where each person who shaves off his facial hair can raise money with the help of friends, colleagues and others who can sponsor one’s beard on behalf of The Garden of Dreams Foundation. They’ve made dreams come true for countless kids facing obstacles of all kinds. 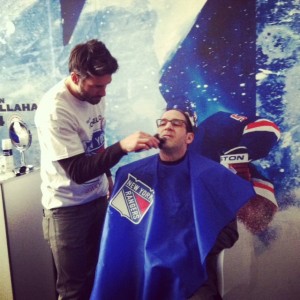 So while I am extremely uncomfortable without my facial hair, I am extremely proud and happy to be able to help—in some small way—a great organization help others.

What does facial hair have to do with hockey, the Rangers and the Stanley Cup? It’s part of a long running superstition that players and fans have been part of, including yours truly, for years and years. In 1994, prior to the Rangers beginning their playoff run on their way to their first Stanley Cup Championship since 1940, I decided to grow a goatee superstitiously just like most if not all of the players who do so as well and keep it on until they win the Cup. I did my part eighteen years ago—and they won. But then I ended up liking the goatee, and so did girls (at least at the time). So I kept it on in what became a whole new superstition surrounding The Hair. I became concerned about what would happen not only with the Rangers but would happen with my life. Hence it stayed on until 11:45am, Monday, April 9th.

Now, my brand new superstitious facial hair will begin all over again.

Maybe I am an important link between the Rangers’ last Cup and their next one, which, god-willing, will happen sometime this June. Maybe if I shaved the goatee after the team won in ’94 as per the rules of this superstition, the Rangers would have a few more championships-and my life would be better!

My new playoff beard begins now. When it comes to the client, whatever it takes—especially when it helps others.