Founded by William J. Riley in 1906, New Balance got its start in the Boston area selling arch supports and other accessories meant to improve shoe fit. In 1927, Riley hired Arthur Hall as a salesman. Hall later became a business partner and found success in marketing arch supports to people who spend much time standing during work.
It wasn’t until the 1930’s that New Balance began to manufacture footwear specifically for athletes. This pivotal new direction for the company earned them a following of athletes, who specifically requested their shoes. In 1956, Hall sold the business to his daughter, Eleanor, and her husband, Paul Kidd. In 1960, New Balance began selling the ”Trackster” which was not only the first running shoe with a ripple sole, but also the first shoe to come in various widths. This put them on the map as a running brand, but their 320 shoe manufactured in 1976 made them a force to be reckoned with in the industry. 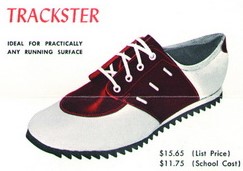 The 565 Model from 1983 to Today
In the early 1970s, running was starting to become a very popular activity. Initially thought of as a phase, it carried on intensely into the ’80s and eventually distinguished athletic shoes as a multi-billion dollar industry. The 565 Model was first manufactured in 1983, during the rise of the new fitness boom. Most athletic shoes were made for running on pavement or sidewalks, the 565 was one of the first shoes made for running off-road. Made with durable material and designed to be as comfortable as regular running shoes, people were able to run in woodlands and other off-road areas with unforeseeable obstacles.

The 565 model is still sold today with a few variations. People can still buy the original design from their classic lineup or they can purchase their ”Everlight” walking shoe. Although it has the same shape as the original, the ”Everlight” model is made with different material which is more flexible and has a zip closure instead of laces. The 565 shoe is just one of many innovative pieces of footwear they have under their belt.

Did You Know?
What else occurred in 1983:
Movies/TV – Third installment of the classic Star Wars series, ”Return of the Jedi,” was released in theaters. ”Terms of Endearment” won the Oscar for Best Film. The popular action/adventure series, ”The A-Team,” made its television debut.

Music – The single for pop artist, Michael Jackson’s, ”Beat It” was released and was number 1 on Billboard top 100. Metallica released their debut album, ”Kill em’ All,” and started a new era of heavy metal music. Alternative rock band, R.E.M., released their debut and cult-classic album, ”Murmur.”