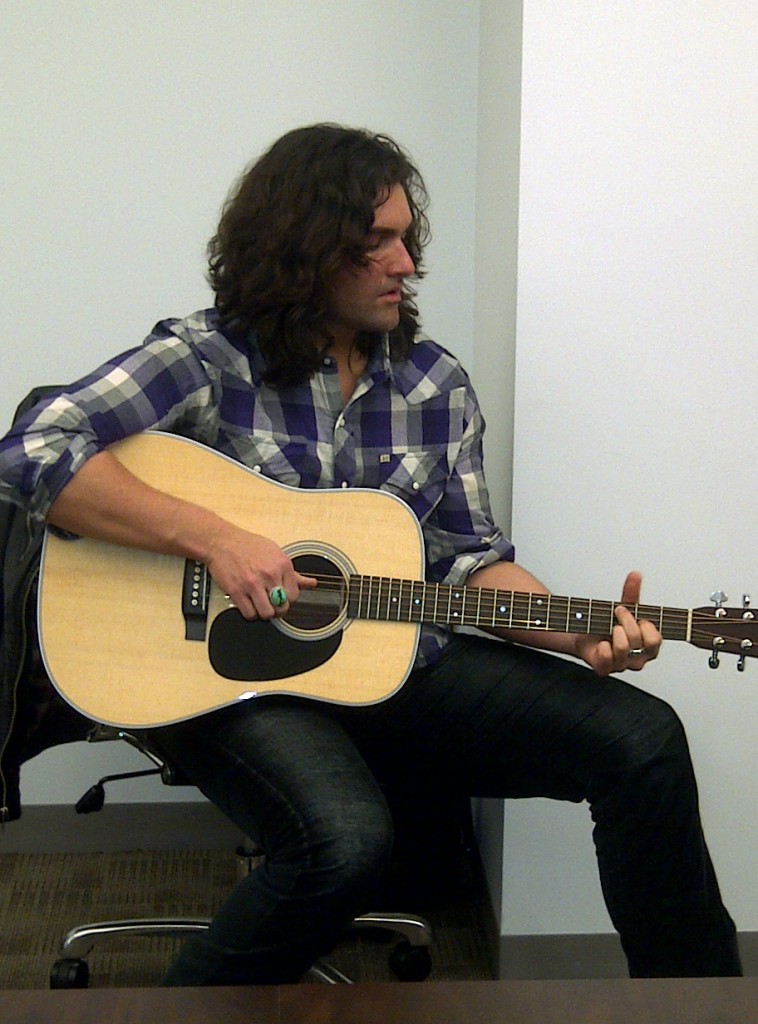 The other day, I spent my lunch hour snacking on cheese, crackers, and desserts—all while being serenaded by a smooth-voiced country heartthrob in the George Clooney, circa-”E.R.” mold. Never mind that I was there with 40 other people, most of them women, I chose to ignore those odds. Yeah, sometimes my job is pretty awesome.

You see, during a stop in New York to promote his new single, ”Wanna Make You Love Me,” DKC client and country newcomer Andy Gibson came by the office to play an acoustic set. With his natural charm and southern boy appeal, all the women in the room couldn’t help but smile and melt at his lyrics—myself included.

The performance, or as I call it Acoustic Lunch Hour, started with the monster hit song from 2011, ”Don’t You Wanna Stay”, which Gibson co-wrote and was made famous by Jason Aldean’s and Kelly Clarkson’s performance at the 2010 Grammys. The song has generated so much airplay and awareness that even the country uninitiated sang along. Gibson then formally introduced himself to everyone, making each and every one of us feel like his close, personal friend.

Andy told us all about how he got his start in music and how he instantly fell in love with the country style, growing up in Nashville, Tennessee: the heartland of country music. Paying his dues early, Andy spent his days serving food, bussing tables, cleaning bathrooms at a Mexican restaurant, playing music at night, and writing music in every spare moment in between. In this formative period, Andy forged his passion for music and became enthralled by the thrill of live performance. And all that practice and hard work really paid off, judging by the ease he displayed performing in the cold confines of a corporate conference room. It’s clear the man could get an order of monks to clap their hands.

One night, while working on a shift, one of Gibson’s icons, country producer John Rich, walked into the restaurant. Gibson decided to seize the moment and grabbed his guitar. On the spot, he translated a Rich song, ”Lost in This Moment”, into Spanish to perform for the crowd. The rest, he says, is history.

After playing us a little clip of that now infamous Spanish translation, Andy launched into his new single ”Wanna Make You Love Me,” a sweet, plaintive song that is now on the Top 30 on the country charts and shows real promise of making him the breakout star we know he very much deserves to be (but of course, we’re not biased).

After his performances, Andy opened up for a Q&A and was asked about one of the most important things to any country crooner–his guitar, which is covered in etchings and signatures scrawled in Sharpie. Andy explained that each signature was from someone he had met on his radio promotional tour. For me, this showed how much Andy takes this opportunity to heart and how hard he’s willing to work to make his dreams come true.

I can speak for my colleagues when I say that we were all grateful that Andy stopped by to perform for us and introduce country music to those who might not have followed it avidly. I, for one, am hoping to hear more of his music for many, many years to come.

For your enjoyment, please watch the video below to listen to some of Andy Gibson’s wonderful talent that the DKC NY offices were privileged enough to witness first-hand. It could be enough to ”Wanna Make You Love Him!”