Wrestlemania, Part II: Becoming a Fan All Over Again

I used to watch the WWE when it was the WWF, when Andre the Giant and King Kong Bundy and Ricky the Dragon Steamboat ruled the ring. As I got older, though, my fandom waned, going to high school then college. During those years, the only time pro wrestling registered with me was when I found out there was a Superstar named Sycho Sid (nee Sid Vicious). His WWF career didn’t last too long–but I still have his action figure on my desk.

Flash forward to one week in March 2012, when my colleagues and I stood on the field at Sun Life Stadium, current home to the Miami Dolphins and former home of the Florida Marlins–an orange-bedecked octagon plopped down in the middle of Miami-Dade County, vulnerable to heat, humidity and, of course, rain. The sun was beginning to set and soon the main event would take place. The seats were filling quickly, with WWE fans alternatively chanting “WE LOVE CENA!” and “CENA SUCKS!” (John Cena, for the uninitiated, is one of the WWE’s biggest stars, crossing over into movies and the occasional Nickelodeon TV show that my daughter watches.) 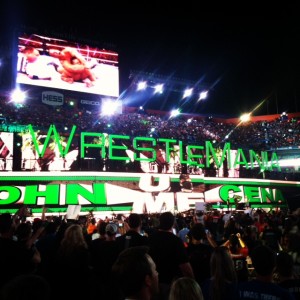 Towards one end of the stadium, there stood a giant stage stretching from sideline to sideline, and giant, illuminated capital letters spelling out W-R-E-S-T-L-E-M-A-N-I-A stood sentry. A massive ramp, probably 40 yards long, led directly to the ring, itself surrounded by four massive palm trees (more on those later) with giant TV screens on all four sides–the better for those in the nosebleeds to see the action with. TV crews from the WWE intermingled with security staff from Sun Life and, of course, the fans streaming in, each wearing the t-shirts of their favorite Superstars and Divas: the aforementioned Cena, The Rock, Sheamus, Kelly Kelly, The Miz, Jericho, et al. And there were fans of the old-timers, too: Edge, Triple H, The Undertaker, and even more from way back: at one point, fans went nuts when The Iron Sheik entered via wheelchair. Of course the crowd was peppered with homemade signs — the ultimate love letters to their favorite wrestlers. Soon, the old Joe Robbie Stadium — originally for football and having failed as a venue for baseball — was packed with a record 78,363 fans, all there to see a historic sports entertainment event.

WrestleMania 28 lived up to its own hype, from the opening match — which saw current WWE heavyweight champion Sheamus knock out Daniel Bryant with a high kick within the opening seconds — to the epic battle between Cena and Dwayne “The Rock” Johnson. If you couldn’t hear the punches, elbows and bodyslams from your seat or on pay-per-view, the crowd helped by punctuating each hit with a “BOOM!” and a “BOOM!” and an “OHHHHHHHH!” In an interview with AP Radio, WWE’s Natalya pointed out that in the WWE, there are always “good guys and bad guys,” and sometimes the crowd helped remind us which was which, for instance, loudly cheering for Big Show or guest Diva Maria Menounos, or heartily booing The Miz. (Far be it from me to take sides, of course — but I’m happy The Rock won his match.)

Towards the middle of the event, an epic, what-seemed-like-it-took-forever match between Triple H and the Undertaker was clearly the favorite, with the crowd breaking out in a “THIS / IS / AWE-SOME!” chant at least twice. Guest referee Bret Hart, whose WWE career was ended by the Undertaker some years back, added to the drama by getting (accidentally) knocked out during the match. A few chairs, a sledgehammer and one steel cage later, the match ended with Undertaker victorious, and all three leaving the ring together, beaten and a little bloody, but brotherhood well intact.

And that, I think, is the underlying and / or overarching theme of the WWE: that despite the apparently animus between “the good guys and the bad guys,” ultimately, we can all get along. The fans helped prove that by taking a break from their partisan catcalls to yell, in unison, “(BLEEP) THE PALM TREES!” — by far the funniest, and most unifying, chant of the night.

WrestleMania was a great spectacle, and an engaging one, to be sure. It had enough drama and emotion to rival The Bard’s greatest plays and even put some of Michael Bay’s action flicks to shame. It had Flo Rida and Machine Gun Kelly and a cameo by Diddy and Mike Tyson as its social media ambassador and a world heavyweight champion who charms with an Irish brogue and disarms with a single kick to the throat. It has smart-aleck fans who chant for Superstars and Divas and against fake palm trees. And now I have no choice but to care about what happens next to The Rock, to John Cena, to Sheamus and Hornswoggle and Alicia Fox and Rey Mysterio and Mick Foley and The Miz and Kelly Kelly and David Otunga and maybe even my imagined WWE persona, “Sid The Run-On Sentence.”

Yes, WrestleMania made me a fan again. And perhaps that’s the most amazing thing of all.