A few weeks ago, I was forced to wear leopard, red, an oxford shirt and loads of denim. Thankfully it was not all at once, and as much as this sounds like a weird fashion mashup experiment for the sartorially challenged, it was an interesting look inside the mind of a new breed of influencers: fashion bloggers.

You see, recently DKC began working with fashion bloggers in a big way on behalf of various brands and publications and collectively we had developed a major case of job envy. For weeks, all you heard was, ”how hard can this be?” percolating around the desks as we pitched client after client to our new blogger friends. Simply put, our impression was that as a group, fashion bloggers put on cute clothes to do cute things and then chronicle said cuteness for other girls – and it is mostly girls – who read their missives and want to do the same. And now some of them were getting paid big bucks. These fashionistas were appearing in advertising campaigns! Sitting front row at highly-esteemed fashion shows! My god, this has got to be the easiest way to make a buck ever, right?!

Not so much, as it turns out.

We decided to walk a mile, er, week in their Jimmy Choos and realized that this blogger thing isn’t all cupcakes and cashmere (a widely read cacophony of cuteness, incidentally). So, the DKC entertainment department held its first ever (and possibly only) four-day ”fashion challenge.” The rules were simple enough: together, we agreed on a theme for each day that we would all have to interpret using our own wardrobes. Since we started the challenge right after Columbus Day, we had a 24-hour reprieve. Everyone came to work on Tuesday decked out in the allocated leopard theme. We sported animal print shoes, scarves, and dresses. People who walked by were perplexed by what they thought was a coincidental matching plan or some weird department hazing ritual. We laughed, emboldened by our ingenuity and apparent abundance of leopard print in our closets! Who knew? 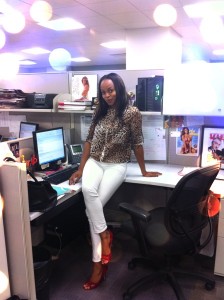 On Wednesday, the team was required to wear something red. This too wasn’t such a stretch. It ranged from blinding red pants to the ease of red lips, albeit that was cheating a bit. By Thursday though, just two days in, my competitive streak was wearing thin as were my outfit choices. We were supposed to wear an oxford shirt (extra points if you incorporated a bowtie, don’t ask), but I didn’t even own a button-down. The morning of, I found a ratty shirt that barely passed muster for the theme and called it a day. I suppose you need a well-stocked closet to do this fashion blogger thing, or the ability to raid someone else’s at the very least, before you make it big and start swimming in all those freebie duds! 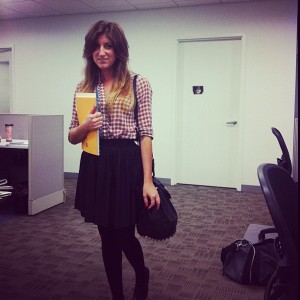 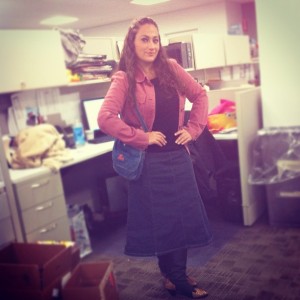 Friday was the most difficult test as we saved the best for last: denim on denim. The only person I’ve seen pull off this look is Sienna Miller, and I don’t even consider her a real person. Luckily, my roommate works in fashion PR and he let me rummage through his closet for a solid ten minutes until I found an apropos top half for my outfit (see the aforementioned closet raid reference). Clad in denim on denim riding the subway, I felt like an idiot. I can’t say my colleagues fared much better, with a few exceptions. Together, we resembled a stylish rodeo team, and not the insouciant fashion bloggers we were trying to emulate. It was the perfect way to end the week, and for me to realize some things are better left to the stylish professionals.