Inside the Historic Face Transplant of Hero Firefighter 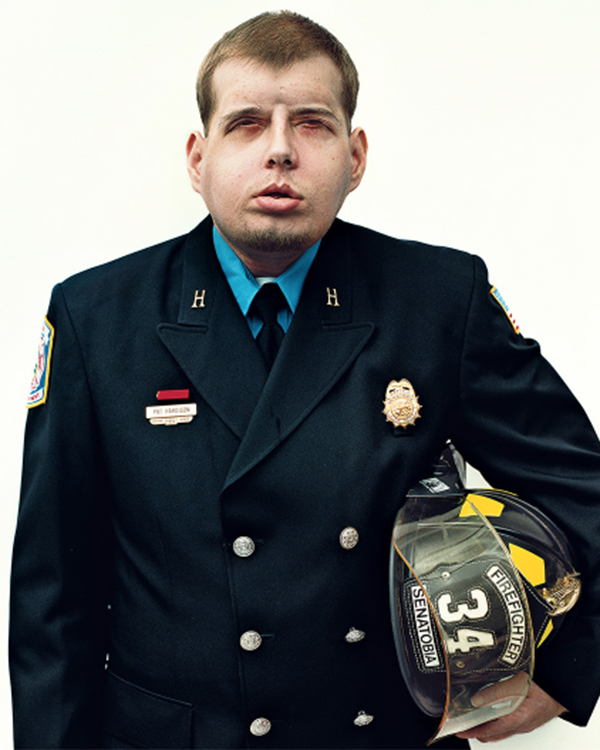 It’s been more than a decade since Patrick Hardison first became disfigured. Back in his hometown of Senatobia, Mississippi, he served as a volunteer firefighter—a job that helped him afford a dream home for his wife and three kids. On the fateful day, Patrick entered a burning home in search of a woman. On his way out the roof collapsed. He endured burns across his face and torso, which caused him to lose his lips, eyelids, ears—nearly every dominant feature of his face. Hardison spent years waiting, hoping that one day he could look normal again.

Enter David Rodebaugh, an accomplished BMX biker who resided in Brooklyn. One evening Rodebaugh was rushed to the hospital after a biking accident that led to a brain injury. A pedestrian had walked out between parked cars on the street, which caused Rodebaugh to collide and flip over the handlebars. He wasn’t wearing a helmet at the time of impact. Doctors tried to reduce swelling of his cerebellum through surgery. Though he was fine for a few days post-op, he suffered a brain bleed and slipped into a coma. He was declared brain-dead days later. Rodebaugh, an organ donor, was referred to Dr. Eduardo Rodriguez via the LiveON NY program, which matches donors with prospective recipients. Rodriguez had found Hardison a match, and had him on a plane to New York the next day.

NYU Langone’s Face Transplant Program, led by Dr. Eduardo Rodriguez, is comprised of over 100 staff members from support and technical staff, to nurses and physicians. For 26 hours the team performed the transplant, making it the most extensive procedure of its kind. Now months later, Hardison is in rehabilitation to regain strength and motor skills in his face. Though he still has far to go in his recovery, he feels far closer to finding himself again. Rodriguez’s end goal for NYU Langone’s Face Transplant Program is to help burn victims, such as Hardison, regain a sense of self and normalcy after the trauma they have endured.

“The development and proliferation of these types of procedures – and the necessary funding and reimbursement of them — will benefit burn and trauma victims around the world, in particular first responders, victims of terrorism and like atrocities and severely injured soldiers/veterans – just to name a few. In fact, the Department of Defense is a major funder of research and development of full face transplants,” DKC president Sean Cassidy said of this moment in medical history.

In moments like these, medical advancement can be life changing to victims of trauma. However, without the means to spread this medical success and impactful changes in healthcare, much of the population would remain uninformed. DKC is proud to have spearheaded the media initiatives on behalf of NYU Langone Medical Center’s face transplant program. Below is some of the key news coverage:

Firefighter Gets Most Extensive Face Transplant Ever – CBS NEWS