The Olympics From Both Sides of the Pond

For a time, it seemed like the London Olympics were never going to get off the ground. Before the ceremonial torch was even lighted, most of the pre-Games talk centered around projects falling behind, questionable logo design and the promise of traffic nightmares galore. Even Jon Stewart of The Daily Show —which is carried in the U.K., by the way —got in on the action, mercilessly needling organizers for what he anticipated would be a terrible opening ceremony. Combine all that with ever-present security concerns and you had what appeared to be all the ingredients for a very messy pea soup, rather than the quadrennial showcase of the world’s top athletes that the Olympics always has been.

Most of that worry, of course, came courtesy of the media, which needed to fill the four-year gap between Beijing’s 2008 edition and the games of the 30th Olympiad. But just over two weeks later, we see that the only major snafu at the Summer Games was London’s mayor, Boris Johnson, getting stuck on a zip-wire line 150 feet above ground (that and some empty seats during the first few days of the Games). There was also a wrong flag incident and a falling flag incident but other than that, no other major gaffes.

In other words, the naysayers were wrong, and the sentiment was almost universal: London pulled off a great Olympic fortnight.

In the U.S., tens of millions of viewers watched the London Games on TV, while the BBC reported reaching more than 54 million people online. NBC caught flack, of course, for its tape-delayed coverage —#nbcfail was quite possibly the most sustained Twitter trending topic in a while —and the BBC’s livestream could only be accessed from within the U.K. One way around these obstacles was to hop a flight across the Atlantic and take in the Games in person —which is exactly what my colleague Rebecca Riordan did. Here, she recounts her Olympics experience in the form of an ode —though now that we think about it, a Shakespearean sonnet might have been more appropriate: 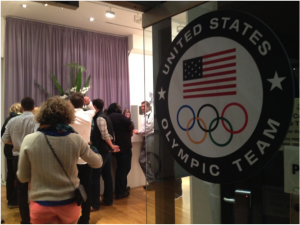 So to sum up: the Olympics were a great experience, whether you saw them in person or watched them on this side of the pond. (For those of you that still miss the Games, the memes live on—even some McKayla Maroney WOULD be impressed with.)

Alas, Rebecca did leave before the biggest, baddest highlight of the Games: the Spice Girls reunion during the closing ceremonies, which was simply the dog’s bollocks. I mean, Scary, Sporty, Baby, Posh and Ginger, zipping about Olympic Stadium on top of cars, singing ”Wannabe” and ”Spice Up Your Life,” whipping both crowds and viewers into a frenzy?