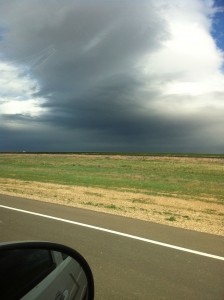 This past Sunday, I had the great pleasure of sitting next to Mary Emeny at a dinner in Amarillo, Texas where we were showing highlights of Ken Burns’s upcoming film, The Dust Bowl. Mary, I later learned, is prominent in the arts and environmental communities in Amarillo. When I asked someone else at the table what Mary did, she responded, ”She makes Amarillo worth living in for the rest of us.”

During our chat, Mary spoke about her trips to Vietnam as a young woman and specifically, her work with Buddhist monks there on behalf of Thich Nhat Hanh, the Vietnamese Buddhist monk. (Vietnam came up because Ken Burns is working on a film about the war in Vietnam.)

Among his many accomplishments, Thich Nhat Hanh was nominated by Martin Luther King in 1967 for the Nobel Peace Prize for his efforts to stop the war in Vietnam. Today, he’s known as well for his writings on Buddhism– in particular, mindfulness and the importance of being present in the moment. ”Life is available only in the present moment,” he wrote in ”Taming the Tiger,” and ”the past is gone, the future is not yet here, and if we do not go back to ourselves in the present moment, we cannot be in touch with life.”

The Dust Bowl provides many opportunities to think about this message, given the hardships created by the decade-long storms for the people of the Oklahoma Panhandle, where we were traveling to launch our promotion for the film. April 14th was the 77th anniversary of the worst storm, now remembered as Black Sunday.

Weather turned out to be a large part of the trip, and not just the dust (though we saw lots of dust blowing). On, April 13th, our first day in Oklahoma City several tornadoes touched down just south of where we were. The next day, we left Oklahoma City at 5 a.m. Several hours later, we drove through Woodward, Oklahoma, a town of about 12,000 people. We stopped at Hutch’s, a small convenience store, for coffee and water. Two elderly women working there were getting ready for the day. We chatted about our trip and the weather, and they explained they had already seen earlier in the week ”hail the size of grapefruits” and they were expecting ”harsh weather” later in the day.

Several hours later we arrived in Guymon, Oklahoma and later showed The Dust Bowl to survivors of the storm featured in the film, followed by a drive through Cimarron National Grasslands.

The next morning, as we were preparing to drive to Amarillo, we learned that Woodward had been hit by a tornado, one of more than 100 that touched down in the region over the weekend. Much of the town was destroyed and six people, including two young girls, five and seven years old, died.

At the dinner in Amarillo, Dr. John Bridwell gave the invocation. I thought, ”Ah, Texas and God,” as he prepared to speak, wondering why there would be an invocation at an event like this. Minister Bridwell said:

”Where are the safe heavens, Lord?

The bowels of the earth grown and grind and erupt,

Tsunamis blaze and erase our work,

And destroy our castles and shacks, the products of our hands and heads,

We run and splatter, and sputter, and scream and cry, and curse,

But time does not hear us, nor seem to care.

”The winds rage incessantly, we feel, and ruin our crops, and assault our homes,

And make us grasp for breathable air, and we cry mud and suffocate,

And lay our babies and elderly to rest.

Oh, Lord, God, what is this? Where are you? Where do we find refuge?”

His words seemed, to me, to reinforce Thich Nhat Hanh’s message of mindfulness. Throughout the evening, I thought about our quick stop in Woodward at Hutch’s. Was I truly present when there and curious about the lives of the women who worked there and greeted us? I thought about the families who lost their homes, and of course the family that lost their lives, including the two young sisters.

I thought about the families of the Dust Bowl, who endured apocalyptic storms that seemed to them like the end of the world, as well as Floyd Coen, a survivor in the film who is now in his 80s, recalling the death of his young sister from dust pneumonia. We visited her grave site in Kansas.

Perhaps it is obvious, perhaps even a bit silly, but the suddenness of these storms, along with the ravaging dust bowl that over years destroyed farms and families, seemed to emphasize the importance of the present moment, given how quickly the next moment can be shattered.

”Then the sun rises once again, and the heavens declare your glory, but we do not forget,

The day is clear, the sky is glorious, the breezes caress, the earth heals and so do we, but we do not forget.”