Did you know that 70% of people most likely to take action for a cause are motivated by friends and family on social media? Content shared online impacts large groups of people in a short amount of time. Using this knowledge, Martin & Company, the iconic American guitar company, and The Nature Conservancy have teamed up to help protect endangered African elephants. The new campaign – #SaveElephants – is focused on reducing the global demand for ivory using social media and influential entertainment industry figures. 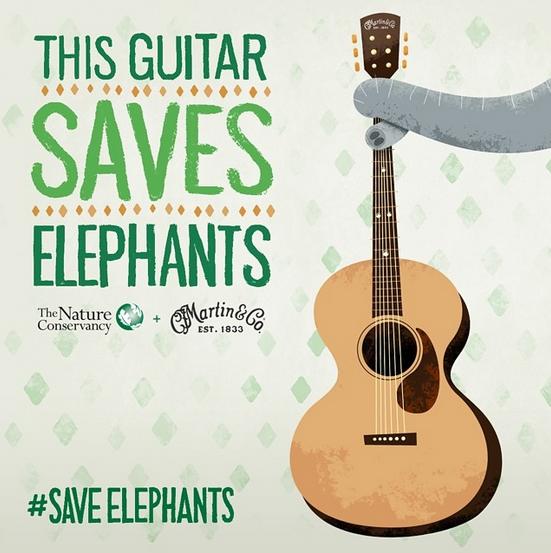 With DKC’s client Martin & Company as a founding partner, The Nature Conservancy created “This Guitar Saves Elephants.” Launched through an indieGOGO campaign, This Guitar Saves Elephants features Martin guitars signed by award-winning artists as well as aspecially designed and donated Martin Guitar that features the name of Satao, a famous elephant recently killed for his ivory, an elephant tracks inlay, and other accents that celebrate these extraordinary animals.

Martin Guitar has been creating the finest instruments in the world for over 180 years, and is a leading acoustic instrument maker. Martin has been concerned about the poaching of African elephants since the 1970s when it made the choice to start phasing out elephant ivory on its instruments, replacing it with a synthetic material. A hang-tag that was featured on its guitars at that time stated the company’s position: ”C.F. Martin and Company refuses to be a contributor to this atrocity.” Since then, it has continued to develop and use materials that it believes comply with its sense of environmental stewardship. In 2013 Martin Guitar stopped using Preserved Mammoth Ivory (PMI) and implemented a plan to phase out using the material on its models. Today Martin Guitar is proud that PMI, like elephant ivory before, has been completely removed from its supply chain and is no longer used on any guitar model it manufacturers. 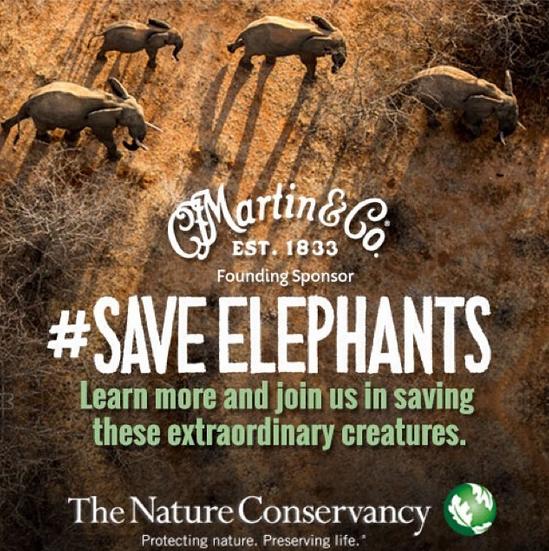 ”Forty-five years ago we phased out the use of ivory. And yet today I’m still concerned about the horrible slaughter of elephants. This is a terrible shame and it should stop. And the only way it is going to stop is if people stop buying and using ivory,” said Chris Martin IV, Chairman and CEO, Martin Guitar.”

”About 55 elephants are illegally killed each day to fuel the global demand for luxury goods made out of ivory,” said David Banks, Managing Director of The Nature Conservancy’s Africa Program. ”Martin Guitar is lending their star power to help end this crisis and the awareness they raise for the issue will make a real difference.”

To learn more about this campaign, check out this message from Chris Martin IV and The Nature Conservancy’s interactive website. Follow @MartinGuitar, @nature_africa and #saveelephants for more updates.