Wrestlemania, Part I: WWE Uses Its Power for Good

[This post is the first in a series of three about DKC’s time at Wrestlemania XXVIII.]

Upon finding out that DKC would be working with the WWE and WrestleMania XXVIII in particular, I was beyond thrilled, and slightly giddy. Since my role in the sports department here is focused on entertainment, what better project than the largest sports entertainment property in the world? 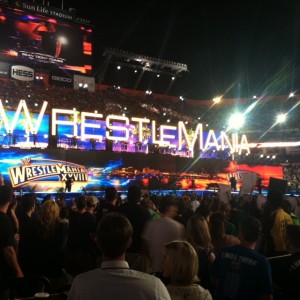 DKC was retained by the WWE to support their communications team, both socially and traditionally, surrounding WrestleMania XXVIII and the dozens of events leading up to it. Before we knew it, the DKC WWE team was on a plane to Miami for the week’s festivities.

Now, like many people my age, I grew up watching WWE (then WWF) on TV-Macho Man Randy Savage (I knew him as Macho King), Honky Tonk Man, Hulk Hogan-all names from childhood. But like most kids that age, I thought it was real. (Or was I the only person not in on the act?) So as I grew up, I always thought of the WWE as a violent sports substitute.

Boy was I wrong.

Now rated PG, the WWE is also exceptionally socially active. From their heavy involvement in the Make-A-Wish Foundation, strong support of the troops, global literacy programs to their major anti-bullying campaign,”be a STAR,” the WWE does anything and everything it can to enrich the lives of its fans. And I had the privilege of witnessing almost all of this first hand.

Seeing little Colton’s eyes light up when he saw Superstars and Diva Mick Foley, Tyson Kid and Natalya walk into his hospital room at Joe DiMaggio Children’s Hospital provided the first tear-jerking moment of the trip, and it certainly wasn’t the last. Watching a mother cry upon seeing her son smile for the first time in a long time is a moment you just can’t shake.

The next day, I went to JFK Middle School in North Miami Beach for an anti-bullying rally, where over half of the kids there said they’ve been bullied at some point or another. After witnessing some pretty moving speeches from David Otunga (better known as Jennifer Hudson’s fiancÃ©) and The Miz, both of whom had been bullied as kids-I knew this story had to be told.

As a publicist, I consume an insane amount of media on a daily basis, yet I had never heard of ”be a STAR,” which was created well before the anti-bullying movement swept the nation. Every day, we’re tasked with generating positive publicity for our clients in appropriate and targeted outlets, but this was a story that truly meant something to me. Like so many kids, I was bullied in school, and to know that these buff Superstars were also in that same embarrassing boat growing up struck a chord with me.

Not only did I want this story told for my client, but I wanted this story told for myself. Other kids out there needed to know that these icons of massive stature were also picked on-and as the saying goes, ”It Gets Better.” Not to self-aggrandize too much, but this potential story took on a new meaning. If at least one child that’s being bullied in school read about ”be a STAR” and the WWE’s initiative, maybe they could have some newfound optimism for their future.

And luckily, the Associated Press, the largest news wire service in the world, told this story for us. And if the piece helped provide a glimmer of hope for one of the over 199 million people whoread it, then I had accomplished my goal.

The next morning, after the story ran, I witnessed the most emotionalmoment of the trip-the Make-A-Wish Pizza Party hosted by John Cena. Some may not know this, but John Cena has granted more ”wishes” than any other celebrity or athlete since the establishment of the Make-A-Wish Foundation. Cena had actually granted a dying wish to a young boy about two weeks prior to WrestleMania, and he told that frail child, Dylan, that if he could hold on for a few more days,that he’d be Cena’s guest at WrestleMania. That boy, who had less than 24 hours to live and had defeated cancer four times, attended that pizza party at Jungle Island, and then WrestleMania XXVIII the next day.

These stories all compounded to create an entirely different view of the WWE and what it truly stands for. The WWE as an organization, as well as its Superstars and Divas, knows that it has power in its fan base and a solid platform to tell multiple stories – and it uses that platform not only to entertain, but to enrich and inspire.

Our week in Miami was one filled with emotional highs and lows, but it will remain with our team forever.

And we can all look forward to WrestleMania XXIX and the powerful moments leading up to it right in our backyard next year.